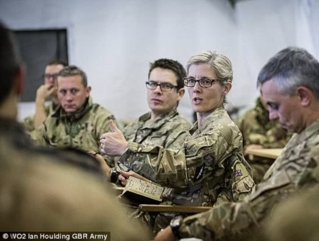 Major General Sharon Nesmith will become the highest-ranking female officer in the history of the British Army.

The mother of two who is in her early 50s will be promoted to Lieutenant General in August 2022, making her the most powerful woman in the British Army. Maj Gen Nesmith will also be the first woman to hold a three-star rank, which is the second highest rank used in the military.

Maj Gen Nesmith says: “I feel deeply honoured to be appointed as the Deputy Chief of the General Staff at such a pivotal time for the British Army. I look forward to playing my part in leading our future soldier transformation to become a more lethal, agile, digitised and expeditionary force.”

How she got there
At the beginning of her career, Maj Gen Nesmith served the Electrical Warfare Regiment, the 1st Armoured Division Headquarters and Signal regiment in Germany, while also completing three tours in the Balkans.

In 2010, she commanded 215 Signal Squadron while on Operation Telic 10 in Iraq, to later command 22nd Signal Regiment, leading to her promotion to Colonel.

Maj Gen Nesmith then moved to Gloucester, UK, to command the 1st Signal Brigade. During this position, she helped prepare forces which are held at high states of readiness to support current and future military operations across the globe.

Now, she will be the first woman to hold the prestigious appointment, serving as deputy to the professional head of the army, Chief of the General Staff General Sir Mark Carleton-Smith.

“She is the right person at the right time to drive the Army’s transformation and she brings a wealth of experience, energy and fresh ideas,” Gen Carleton-Smith said.