Sarah Bern: Being Different is a Super Power 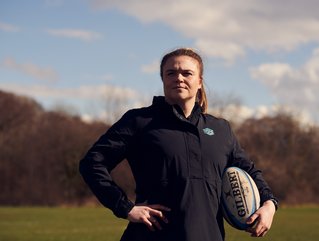 It’s often said that three is the magic number – and in this case, that’s certainly the truth. Sarah Bern is a tighthead (otherwise known as number ‘3’) for the Bristol Bears and England Rugby teams. While Sarah has seen huge success in a typically male-dominated sport, recently scoring a try from the half-way line while being on the pot she didn’t exactly have the easiest ride getting there.

So how did it all begin – why rugby?

I was 10 years old, maybe 11, when I picked up a rugby ball for the first time. My cousin and I are very similar in age, so I used to copy every sport that he did — he probably found me quite annoying. So when he started playing rugby, I followed him down, joined in with the boys and have continued playing all the way up until now.

When I was younger, it was difficult because I was the only girl in a boys team. I was heavier back then, so I was bigger than some of the boys — I think a few found this quite intimidating. But things got better after the first season. I was player of the year and the boys ended up being really lovely to me. I just had to prove myself.

It sounds like a real challenge. What made you stick around?

Probably because it was so hard to fit in – it made me want to stick around. At first, it felt like I shouldn’t be playing with the boys as I was the only girl on the team, some wouldn’t even pass me the ball. But when I’m faced with adversity, it eggs me on as I’ve always had a bit of a fiery side.

So was a sports career an obvious path for you?

I wanted to be Tarzan when I was really young. Obviously, that wasn’t going to work out, so I moved on to dreaming of becoming a doctor or a comedian.

But I'm dyslexic, so I struggled with school. I was perceived as naughty… or maybe cheeky. I couldn't grasp maths and English, so I was worried that I’d look stupid. Art and sports were more my thing – anything creative. So for me, a lot of it was about enjoyment. I found my feet in sport because I was naturally fast and quite good at whichever sport I played, so I continued to do it.

It is hard when you’re young, if you don’t enjoy sitting in class reading and writing. But I’m a big believer in finding a way to enjoy the different things in life.

How do you think rugby has changed since you started playing?

The girls won the 2014 World Cup – so that squad was amazing at the time – but they all still had jobs; Sophie Hemming for example, was a vet. After England finally got the recognition they deserved, people started to take women’s rugby more seriously, so we received investment for the 2017 World Cup, which I was lucky enough to be involved in.

But I’ve noticed a great increase in the number of people who watch us now, and you’re more likely to see articles popping up about women rugby players. Social media has had a massive impact in this sense, but it’s also the switch in generations – younger people are coming through, asking “why can’t we do this?”. They're eliminating the stigma that they might have been attached to rugby a few years earlier.

Do you think it's fair to say that women's teams need to have a degree of success before the general public takes notice of them?

Women in any career have to do twice the amount that a male does to get the same amount of recognition. Historically, women have been faced with more challenges, so there’s always been an underlying superiority for men. As far as we’ve come, no matter what walk of life we’re in, it often feels like we have to work twice as hard.

So what would you say have been the proudest moments of your career?

Just before the 2017 World Cup, we played the Black Ferns in Rotorua, New Zealand, which is known for its hot springs. It was a brilliant game and the first time in 16 years that we won a game against New Zealand in their home country. During the last 20 minutes, the hot springs released steam that surrounded the stadium, which was filled with lions fans. That was an amazing memory for me as it was my second starting cap, so it was nerve wracking!

Of course I have to mention playing in the World Cup – even though we lost in that final 20 minutes, I'm very happy with how I progressed in that year.

It’s great to see that you come across confident and comfortable in yourself. Has that always been the case?

Oh, I definitely had to learn to feel comfortable in my own skin. I was always a little bigger, quite broad and a tomboy – I didn’t want to paint my nails or wear makeup. When you feel different, you’re automatically unsure of yourself and you ask yourself why you’re not like others.

As you get older, there’s a lot of pressure about what you look like – especially in sports. This knocked my confidence, but when I’m on the rugby pitch I just don’t think about that, I’m too busy playing to care.

It took a lot of self reflection, but I would force myself to think “this is my body” and “this is what makes me good at my job”. So I’m proud that I’m stronger and bigger because I can do lots of different things. Without that, I wouldn't be where I am today. I wouldn't be Sarah Bern, the England rugby player.

As a professional sportswoman, how do you cope with injuries?

A physiotherapist said to me once: “You’re this phenomenal athlete because of how you train and play. But if you drive a car at a hundred miles an hour everywhere you go, eventually, it will break down.” And that’s exactly the same for us as humans.

With physical injuries, the first stage is usually shock. You then do what you can to get on the road to recovery. The tricky bit is the middle bit, when you want to play rugby, for example, but you can’t. When I injured my shoulder, I had the surgery, but for a long time afterwards I couldn’t do a press up –  it was so frustrating! But I then realised that I needed to understand where I am now, and where I wanted to be in the future.

The future is not a physical thing; it's just a timeframe we refer to, so there's no point worrying about it because it's not there yet. You've just got to take it slowly and get a little bit better than you were the day before.

Finally, what advice would you give to a young girl looking to start a career in sport?

Find something that you find fun. Even if you are a little nervous at first, stick with it for a couple of weeks to see if you start to pick it up. Also, try a lot of different sports, because if you don’t try them, you won’t know if it’s the one for you.

But I also want youngsters – no matter their age, sex or gender – who feel a little bit different to others to know that being different is a super power. If you don’t quite fit in, don’t let it deter you and definitely don’t let it ruin your dreams. If everyone was the same, we'd all wear the same thing, create the same, do the same thing – that’s not right. It’s important to find what you love, because there is something for everyone.