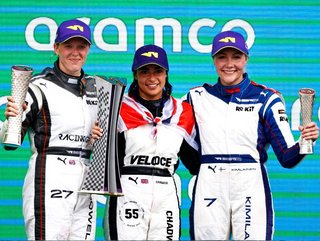 The season begins in Miami, US, on Friday 6 May, and will include 10 races across eight Formula 1 Grand Prix weekends in 2022. The three-year partnership will end after W Series' fifth on track season in 2024.

The partnership with Sky marks the largest media investment to date from W Series, and will include distribution of W Series content across a number of Sky channels. It has also increased the coverage of W Series across Sky’s global platforms, as partnerships with Sky Italia and Sky Deutschland have now started to arise.

Jonathan Licht, Managing Director of Sky Sports says: “In addition to Sky Italia and Sky Deutschland, Sky Sports are delighted to be growing our motorsport portfolio with this recently established elite women's series.

"We pride ourselves in being a good partner to sport and it's been a privilege to work alongside Catherine and her team to come up with a broadcast offering that works for everyone. I have followed the progress of W Series closely and it is clearly a very exciting time to be a part of this journey.

"At Sky Sports we are committed to making sport more inclusive and I can now proudly say that with the addition of W Series, every genre channel at Sky Sports now has both men's and women's sports coverage.

"We look forward to sharing the excitement of this upcoming season with our viewers."

Sky has shared that it is “committed to the marketing and promotion of W Series coverage through its network of channels,” and sees this as an opportunity to promote and advocate women in motorsport.

The 2022 season W Series broadcast talent team is yet to be announced.