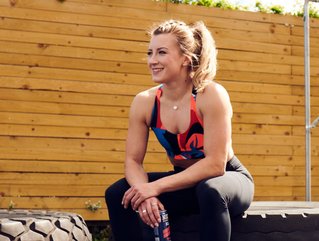 Trading her bike for a bobsled, former Great British cyclist Vicky Williamson set herself a new challenge after recovering from an incident that caused many to speculate whether she would ever walk again. We sat down with Vicky to hear her remarkable story of hope, recovery and triumph.

What an amazing story you have! Could you tell us how you went from a Team GB cyclist to being a Team GB bobsledder?

I was a track cyclist for about 10 years, but in 2016, I had a life threatening crash on the velodrome. I broke my neck, back and pelvis, and I was just two millimetres from being paralysed. After my accident in the velodrome, I remember telling the team doctor that I would still make it to the Rio 2016 Olympics – at that point, I didn’t understand the extent of my injury.

After a long recovery, I was on the lookout for another opportunity. One day, as I was scrolling Twitter, I saw that Team GB were looking for break women for bobsleighs. The advert said it was looking for strong, powerful women, so I thought I may as well go for it!

By the time I went down to the trials, the talent ID process was in the final stages, but because I was already a GB athlete, I was allowed to tag along anyway. As I joined at the late stage, I only had one session on the push track before the final testing – and it made my whole body ache, so I thought being successful was a tall ask. When the time came, I achieved the second fastest time, and from there I was invited to become part of the GB bobsleigh team.

After all these experiences, what would you say has been your greatest achievement?

Throughout my career – prior to my injury – I picked up World Cup medals, which were all very special, but I'd say the highlight of my career was actually when I stepped back onto the velodrome after my injury. It took me 728 days from the crash to getting back into the velodrome, but that feeling made all the pain and work worth it. It may not be as tangible as a medal, but it was an amazing feeling to be back on a bike after most people thought I wouldn’t walk again. So, I guess you could say that my greatest achievement was defying all odds.

How has such an awful accident changed your life and career?

The way I see it, is if I hadn't had the crash, I would never have had some of the amazing experiences that I’ve had since – for example, meeting 25 athletes in rehab, and my partnership with UnderArmour. My time in rehab was priceless, not only because the care was phenomenal, but I was with other athletes who were in the same position as me – we would all egg each other on to continue with recovery. I’d probably go as far as to say it was one of the best times of my career.

It’s unfortunate that I wasn’t able to go to the Olympics. But then I tell myself: life goes on. I’m so grateful for the life experiences and the people that I’ve met along the way, because without the crash, I wouldn’t have met any of them and I'd be a completely different person today. 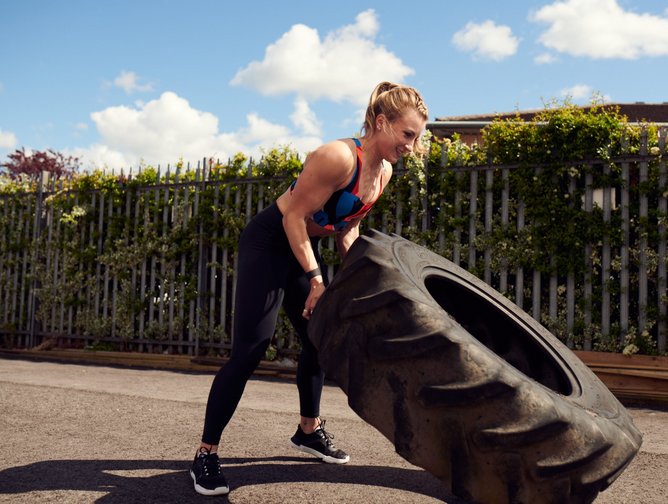 As an athlete, how did you manage to transition from cycling to bobsleighing?

The biggest transition was the weight bearing aspect. As a cyclist, I was used to not having to carry my body weight, but my first season bobsleighing really impacted my joints. I knew the season after would be tough too, but that’s when COVID-19 hit. As I couldn’t travel to the push track, I had to create a make-shift weightlifting platform. During that period, I put in a lot of work to adjust to the new sport and to ensure that I was in the best position possible for the next season.

How do you feel the perception of women’s sport is changing?

The profile of women in sport is improving, although I think that there's still quite a way to go. I think the main issue comes from the investment and sponsors. If women’s sport were to receive more money from that side, as well as more coverage by the media, it would be a massive help. In terms of athletes, we've got really strong females at the front of sports that I guess could have traditionally been considered to have been masculine – or male sports.

The image of women in sport is now changing – for example, there are a lot more women in powersports. When I first started sprint cycling, there were very few female power athletes, but now, the image of strong women is coming to the forefront.

How important is it to have female role models in sport?

Athletes like crossfitter Sam Briggs are great inspirations to women out there. By having these figures of sport be strong women, we’re more likely to challenge what’s perceived as a male sport, and vice versa. As a whole, if we can collectively push the strong females to continue achieving, we’re more likely to banish the barriers women face, such as body image fears. We've got some great people leading the way, so with the media's support, I think we'll see some big changes over the next few years.

How essential are partnerships for women in sport to showcase strong and powerful females?

I'm lucky enough to be sponsored by UnderAmour, who first signed me back in 2017 whilst I was starting my rehab journey. One of the main reasons why I signed with UnderAmour is because I like their brand ethos, which is centred around overcoming adversity and being the best version of yourself. For me, that’s clear within the brand itself, as well as from the clothes – from a performance point of view – as they take into account all kinds of climate, which obviously now, coming into bobsleigh is even more important for me. Now, UnderArmour is very much a family to me, and without their support, I wouldn't be where I am today.

Knowing what you know now, what advice would you give to your younger self?

Don't be afraid to make mistakes. Obviously, I've had to overcome a lot of adversity, and at times, I've been frightened to put a foot wrong or worried that something might not work out correctly. But I would tell my younger self to be more fearless, and to be less worried about making mistakes.

What are your plans for the future and what are you most looking forward to?

Currently, I'm training for bobsleigh and pushing towards the next season – but I'm

starting to think about my career outside of sport, too. I’m preparing for the next step of my career, which I’d like to be centred around coaching both men and women, as I want to give back to the fitness community. My aim is to continue raising the profile of strong women in sport and to focus on elevating women in sport.