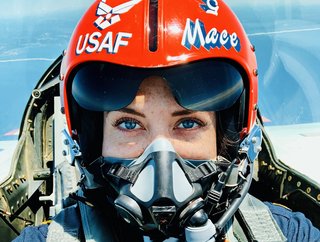 After a phenomenal career as a Thunderbird pilot and a combat veteran of the US Air Force, Michelle Curran share why we need more women in aviation

My big life plan was to study Criminal Justice so I could pursue a career with the FBI – I initially joined the Air Force to pay for my tuition. But halfway through college, I saw a fighter aircraft fly for the first time – I was blown away. I remember saying: “Forget the FBI, I want to do that!” As I was already enrolled in an Air Force college programme as a candidate, I was already headed down the right path to pursue a career as a pilot, so all I had to do was be brave enough to raise my hand.

At first, the fear and hesitation that came with being a fighter pilot had nothing to do with being a woman; though it did become apparent to me later, the initial nervousness stemmed from knowing it was a very difficult path to excel in. But I did excel, and I was on active duty flying F-16s for 13 years – three of which were as a solo pilot for the Air Force Thunderbirds.

Moments of self-doubt did creep in though. When I first became an F16 pilot, we got straight into tactics and technical data– that’s when I realised I was in way over my head. I was one of two women in a squadron with 50 pilots, and I felt a lot of pressure to fit into the distinct fighter pilot culture. I was put under a microscope and there were a number of people waiting to see if I would fail – I knew I had to prove myself.

When asked about being a female fighter pilots, I usually say: “It doesn’t matter what your gender is, the enemy can’t tell, the jet can’t tell.” However, when I joined the Thunderbirds, out mission was to inspire. At that point, I was the fourth woman to fly in the demonstration in almost 70 years, I knew I was in a unique position to be able to inspire little girls and young women.

For this reason, I emphasise to young girls that I was just like them – I had my own struggles and doubts too. I was shy, awkward and I got bullied in school, but eventually realised I had the power to create the life I wanted and achieve the goals I had.

When I was a new fighter pilot, I was so afraid of failing and showing weakness. But I learnt that if you can go after the things that you want, but also scare you, it starts to become who you are. So when those big life-changing chances come your way, you can grab them with both hands and with no hesitation.