International Women's Day: Everything you need to know 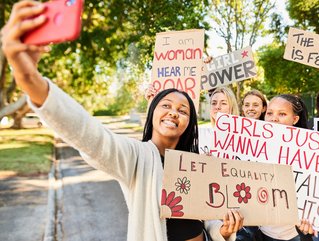 International Women’s Day is here, so make sure you’ve brushed up on your knowledge to really understand what this iconic day symbolises

Across the globe, women are celebrated on March 8, to recognise their social, economic, cultural and political achievements. But the date also marks the much-needed action to accelerate gender parity, fundraise for female-focused charities and raise awareness about women's equality.

What is this year’s theme?

The United Nations (UN) announced that the International Women’s Day (IWD) theme of 2022 will be #BreakTheBias, to provide “Gender equality today for a sustainable tomorrow”. Women and men across the world have been sharing images of themselves with the arms crossed over their chest to support the theme.

What do the IWD colours mean?

Purple, green and white and the colours that represent IWD — all of which have been chosen for different reasons.

Purple signifies dignity, green hope and white purity. The colours originated from the Women's Social and Political Union (WSPU) in the UK in 1908.

Who can support IWD?

Everyone. Femisist and activist Gloria Steinem once said: “The story of women's struggle for equality belongs to no single feminist, nor to any one organisation, but to the collective efforts of all who care about human rights.”

This being said, IWD promotes everyone to get involved, no matter their age, race, gender or nationality. It is a day in which everyone is encouraged to celebrate and advocate women.

Do we still need an IWD?

Of course. Although we have seen a great deal of progress throughout the past few decades, there is still much more work that needs to be done. The World Economic Forum predicts that none of us will see gender parity in our lifetimes — it’s even unlikely that our children will see it. For this reason, it’s paramount that IWD continues it’s pioneering work, to help create a better future.

What’s the history behind IWD?

It all started in 1908, when there was great unrest, critical debate and oppression amongst women. Inequality was spurring women to become more vocal, which influenced 15,000 women to march through New York City, US, demanding better pay, shorter hours and voting rights.

February 28 1909 marked the first official National Women’s Day (NWD), in accordance with a declaration by the Socialist Party of America. Women continued to celebrate NWD on the last Sunday of February until 1913.

A woman named Clara Zetkin, leader of the 'Women's Office' for the Social Democratic Party in Germany, sparked the idea of an International Women’s Day in 1910. She envisioned a day which was specifically celebrated, every year, across the globe. After sharing her idea at the second International Conference of Working Women with 100 women from 17 countries, the idea of IWD was approved.

More than one million women and men attended IWD for the first time in Austria, Denmark, Germany and Switzerland on March 19 1911. The main focus of the day was to campaign for women's rights to vote, work, be trained, to hold public office and end discrimination.

Although Clara’s idea of IWD had no fixed date, it was agreed that it would be annually marked on March 8. This wasn’t formalised until the wartime strike in 1917, when Russian women demanded ‘bread and peace’ in response to the death of 2 million Russian soldiers in World War 1. The strike commenced on February 23 on the Julian calendar in Russia. For other countries that used the Gregorian calendar, this date fell on March 8, which became the day in which IWD is now celebrated.

The UN celebrated IWD for the first time in 1975.

IWD’s first theme came in 1996, which the UN announced to be: Celebrating the past, Planning for the Future. This was followed by “Women at the Peace table” in 1997, “Women and Human Rights” in 1998, “World Free of Violence Against Women” in 1999.

As there was little action surrounding IWD in the early 2000s, the internationalwomensday.com platform was launched in 2001, to re-ignite the purpose and excitement surrounding the day. The website adopts an annual campaign and shares useful guidance and resources to promote the main goals of IWD. Each year, a different theme is chosen, such as #ChooseToChallenge, #EachforEqual, and #BalanceforBetter.

What can you do to get involved?

IWD is widely celebrated around the world, which means that wherever you’re reading this, it’s likely that celebratory events will be taking place close to you. To find out more, click here.

You can also submit a #BreakTheBias image here, or post on social media platforms using the hashtag.