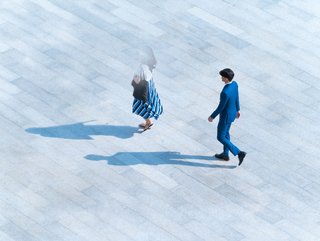 The majority of the world’s data has been collected by men, for men, to produce norms, values and products that favour men – known as the gender data gap

Data collected throughout human history has one major problem: it uses men as a default. So much so, that there are flaws and failings in the way in which women are treated in society, because since the beginning of time, everything – and we mean, pretty much everything – has been based on the male perspective.

“Ever wondered why your smartphone is so big and really uncomfortable to hold? It's because it was designed with the average man's hand size in mind. This is an example of the gender data gap,” writer, performer and feminist Tova Leigh explains, “and if you look around, other examples are everywhere. From transportation systems and tax structures to consumer products – even smartphones and voice-recognition technologies we use every day have been designed with men in mind.”

Now, women haven’t intentionally been overlooked for millennia – unfortunately, it’s just down to how the world works – or worked, we may hopefully add. The truth of the matter is, when data was collected for ‘humans’, the assumption was made that ‘man’ is synonymous, without giving ‘woman’ a second thought.

But, unless you know about the data pitfalls that have seeped through to our everyday lives, you may not know just how much the gender data gap is impacting your life.

“I first heard this term when I read the book Invisible Women by Caroline Criado Perez,” Tova explains. “Before, I had never questioned things like why it's hard for me to reach the door of my car boot or why women’s toilets have longer queues than the men's.

“The gender data gap can impact our everyday lives in small forms, to really big forms. On a daily basis, we have some discomforts we don't even realise, like the height of kitchen cupboards and the fact the queues at women's public toilets are always longer, to actual safety issues, such as differences in medicine. The point is that this impacts women on a daily basis.”

The gender data gap in action

It’s no secret that women face their fair share of obstacles – casual sexism, misogyny and harassment are just the beginning. But the gender data gap gives an insight as to why even the little things are against us – and these ‘things’ can be as small as a few degrees celsius.

In the 1960s, the formula to determine the standard office temperature was developed, and you guessed it, it focused on the metabolic resting rate of the average man. You may assume that the average ideal temperature doesn’t differ too much between genders, but a Dutch study would prove your assumptions wrong. The paper, titled Energy consumption in buildings and female thermal demand, highlights how the metabolic rate of young adult female office workers is significantly lower than the standard values for men. So much so, that the formula may overestimate female metabolic rate by as much as 35%, meaning the current standard office temperature is roughly five degrees too cold for women. Harmless enough, but how many times have you witnessed women draping cardigans or shawls over their shoulders in the summer, while their male counterparts seem comfortable enough in short sleeve shirts?

Sure, we have to stretch a little higher to reach the top shelf and barter to turn up the aircon, but what’s really bringing the heat when it comes to the gender data gap? Tova explains: “It is important we close the gap because it contributes to the inequality between sexes. If we are to have equality, women need to be considered at all levels.”

We can almost hear the cynics saying: ‘Who cares? Just get over it’. But the fact of the matter is that the gender data gap costs lives. And no, we’re not just being dramatic.

When a woman’s silence becomes a safety issue

Over a ten-year period, more than 8,200 women died needlessly following a heart attack, according to the British Heart Foundation. These deaths could have been prevented if women were receiving the same quality of care as men.

The gender data gap has led to women being 50% more likely to receive the wrong initial diagnosis for a heart attack, meaning they’re more likely to experience a delay in seeking treatment as their symptoms are harder to recognise – because they’ve been based on male data. But it doesn’t stop there. Women are less likely to receive potentially life-saving treatments in a timely way, and worse still, they’re less likely to be prescribed medication to help prevent a second heart attack, as explained by the British Heart Foundation.

“How medical devices and treatments have been made by men, for men, is one of the most alarming examples of the gender data gap,” Tova says. “Many symptoms that women get are different to what men get, like with heart attacks for example, yet there is very little research about it and women often get wrongly diagnosed as a result.”

The heartbreak continues, with the gender data gap meaning that women can’t even take a drive in a car without facing more danger than men. This is because women are 17% more likely to be killed in a car accident and 47% more likely to be seriously injured, simply because cars are designed, built and tested by men, using male data. ‘Female’ car crash dummies are merely scaled down versions of male dummies, which are primarily placed in the passenger seat – even though the greatest crash impact usually affects the driver. And while these facts are shocking, it’s just as shocking to learn that female dummies weren’t even introduced to the US until 2011.

Closing the gender data gap has a pretty simple answer: collect sex-disaggregated data. Yet actually achieving this is no mean feat, because, as we covered earlier, women aren’t being maliciously ‘forgotten’ about – they’re being excluded due to everyday bias.

“Women need to be included in research and in trials for medicine, and we also need to establish a default woman, just like there is a default man,” Tova says. “It won't cover everyone, obviously, because we are all individuals, and no two people are exactly alike, but it will at least take into account some factors that are relevant for women and need to be considered.”

We therefore need to envision and design a future where women stand on top of the podium, rather than on the sidelines. In a world where data is Queen (yes, we purposely didn’t say King), we want to make sure that women are not only being seen, but being counted, too.

So our advice would be to mind the gap, as it may just kill you.