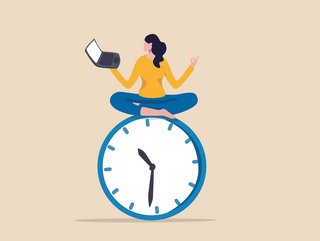 Credit: Getty Images
The increase of flexible working has brought a host of benefits for women in the workplace, but can four-day weeks further this progress?

Today, June 30, marks work from home day, and although the last two years of flexible working have introduced us to a plethora of pros (and in some cases, cons), we wanted to take it one step further, by looking at four-day work weeks.

Four-days work weeks have become increasingly popular over the last few years with CV-Library reporting that adverts for four-day week positions have increased by around 90%. We spoke to Holly Hendrie, project officer at UK Youth and four-day week enthusiast, to find more about the pros and cons of switching up your work routine.

When were you first introduced to a four-day work week and have you tried it yourself?

I was first introduced to a four-day week when I started an internship at Advice Direct Scotland in Glasgow. I wasn’t on a four-day week myself, but I was surrounded by people who were working a four-day week. Everyone at the company including the chief executive was on a rotational four-day week pattern. I completed my undergraduate dissertation on the subject which allowed me to explore the implementation of the four-day week in more depth and understand more about its benefits and drawbacks. Some of the participants I interviewed were very happy on the four-day week whereas others struggled with it.

How can four-day weeks support women in the workplace?

The four-day week can promote gender equality by giving workers the chance to have a better work-life balance. Working four rather than five days for example means that it is easier to juggle childcare issues with work and can promote more women to work, as men can also have the chance to look after children on their day off. I think one of the less known benefits of the four-day week is its effect on the local economy and climate. By giving workers an extra day off, this can be spent in local green spaces and supporting local businesses whilst also helping to reduce energy and fuel consumption.

How can efficiencies be managed over a four-day work week?

I think it's important to offer choice when it comes to implementing a four-day week. Rather than implementing it so a business is closed one day with everyone being off, businesses can put staff on rotational patterns so that the business is open five days but everyone is working four. It’s also important to maintain wages on a four-day week as it has been found that staff are just as productive or more productive working four days over five. There also needs to be a clear communication system so staff who are on their day off are kept in the loop.

What is the transition from five days to four days easy or hard?

The effect of a transition to a four day week on workers is determined by how it is implemented. I think the problem with implementing a four-day week across a whole organisation is that it takes away that element of choice – it becomes ‘forced flexibility’. The four-day week should be implemented within a package of flexible working practices for maximum effect. This will ensure staff have choice over what flexible working options work for them. It should be recognised that some staff may prefer other flexible working options or prefer to stay on a standard full-time contract.