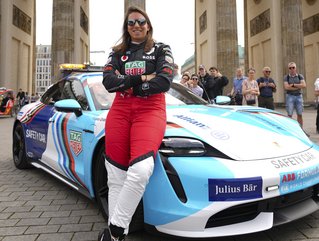 Porsche AG
From a four-year-old go-kart driver to Porsche’s first female works driver, we spoke to Simona De Silvestro to hear about her career behind the wheel

Motorsports is primarily dominated by men – even though it’s one of the few sports permitting men and women to compete against each other as equals. Although there are a number of reasons why there are fewer female faces on racing tracks, we wanted to speak to Simona De Silvestro, reserve driver for the TAG Heuer Porsche Formula E Team, to see how she broke into the industry and why other girls should do the same.

Hi Simona, what first made you fall in love with racing?

My passion for racing came from my dad. When I was growing up, he had a car dealership back in Switzerland and the Formula 1 would be on in the family home every Sunday – he used to say I was only quiet when the racing was on.

When I was four, he held a go-kart demonstration around the car dealership. He drove me around on his knee, but I hated that I couldn’t drive myself so much that I cried for the rest of the day. To calm me down, he said that he would buy me a go-kart when I was taller. So, every month, I would ask and ask, until I was six years old and he finally gave in.

After I was gifted my go-kart, the dealer advised my dad to enter me into a race. He didn’t really expect much because I was a girl and the motorsport industry is heavily dominated by males, but he did it anyway. And I won!

So what steps did you take to go from being a girl in a go-kart to a woman in a Formula E car?

Up until the age of 16, I raced in go-karts, but at 17, I moved to race cars. I had competed in a number of championships, including the Italian Championship in Formula Renault, but unfortunately, we didn't quite have the sponsors to stay in Europe – racing is an expensive sport!

Luckily, I found a sponsor in America so I moved countries and competed in Formula BMW. I ended up living there for eight years. It was quite daunting to move countries for racing, but the team around me was so supportive – they became like a family to me. I also knew it was my best and probably only chance to get into racing, so I wanted to give it everything I had – even if it didn’t work out.

But, as I won races, I attracted more sponsors so I could take the next step to Indy Lights, which is like Formula 2 here in Europe. After three years, I transitioned to Indy Cars and it just kept going from there!

Through these experiences, did you find that you were often the only woman?

When I started, there were actually quite a few girls who would compete, though we were always against a lot of boys. But, when it came to the actual racing, I was often the only girl. Many things have to fall into place in the motorsport industry, but luckily I was always in the right place at the right time, with the right people around me.

In the beginning, it was clear that I had to prove myself – once I was able to show the male drivers that I was quick, they accepted me. But whenever you go to a different championship, women definitely feel the pressure to earn their stripes.

Would you say that you faced more challenges because you’re a woman?

It’s difficult to say because I only know my journey. There are definitely a lot of ups and downs in motorsports, but if you’re striving to reach a really high level, such as Formula 1 or Formula E, you have to make a lot of sacrifices. The biggest challenge I would say that I have faced – and still face, even now – is getting the right opportunity at the right time.

That being said, I have had some truly great opportunities – for example, becoming Porsche’s first female driver – so things are definitely headed in the right direction. It’s definitely become a more open and inclusive industry over the past, say, 10 years, but there’s still room for improvement. 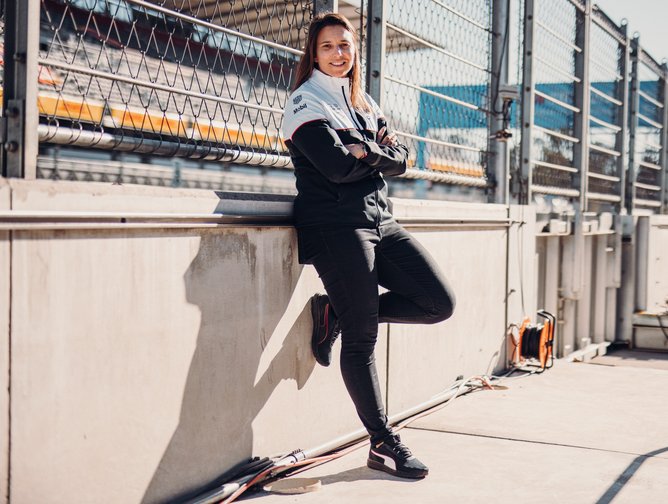 Did you have feelings of self-doubt, and, if so, how did you deal with them?

I never saw myself as a female racing driver, but rather just a driver. It was only later in my career that I realised I was often the odd one out. Girls approach me now and tell me I’m their role model – but I never had any of that. I just wanted to put my helmet on and race. A lot of it comes with time and encouraging more girls to enjoy the sport, but now, I still fight for it because I believe I’m capable of driving a race car fast.

Do you see the W Series as a positive, or would you prefer for all drivers to race against each other, regardless of sex?

To me, there’s no difference between male and female drivers, but the W Series does open the door for girls – especially young girls – to get into racing. The issue I'm seeing now is drivers, such as Jamie Chadwick, are winning and getting great times, but she’s still not getting a seat, in say, Formula 3 or Formula 2. I don’t think things will change until a really big team gives a female driver the chance to compete in big championships – that’s what I’m fighting for.

So what do you say to girls who express that you’re their role model?

There are a lot of programmes out there, for example, the FIA’s Girls on Track, which is so cool because girls can now actually experience racing. I look back at my journey, and I realise that I was very lucky to have parents who let me try racing and encouraged me to pursue it as a passion.

To young girls, I tell them that the road is not easy, but you always have to believe in yourself. It’s also really important to communicate your dreams, what you want to do and what you want to achieve, so hopefully others around you will offer support while you achieve it.

Finally, what can we do to get more women competing in motorsports?

Keep raising awareness. Initiatives like Girl on Track are great because they show girls all the amazing opportunities available in the motorsport industry – it’s not just about being a race driver, there are careers as engineers, mechanics, journalists and so on.

We also need more sponsors to back girls and women. In some sense, you’d think that they’d want to back women as there aren’t many of us, but some see it as a risk. We want to earn our spots on the team – we don’t just want to be a token sponsor – so it’s really important that we show that there doesn’t need to be a gender divide in motorsports.