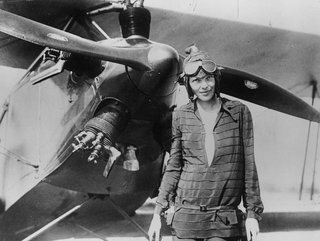 Credit: Getty Images
As the first woman to fly solo around the world, Amelia Earhart lead an interesting life of courage, vision, and groundbreaking achievements

Amelia saw her first plane when she was just 10 years old – but she wasn’t impressed until almost a decade later, when she saw a stunt-flying exhibition. And then on December 28, 1920, she was taken for a flight by pilot Frank Hawks, which changed her life.

Amelia was no stranger to adversity. Growing up a tomboy, she was often met with strong challenges and prejudice, but she was determined to not let them phase her. For a matter of fact, women that went against the grain influenced her, as she kept a scrapbook of newspaper clippings about successful women who achieved in male-oriented fields, such as law, advertising and mechanical engineering.

But on January 3, 1921, Amelia took her first flying lesson. Six months later, she had managed to save enough money to buy her first plane, a two-seater biplane painted bright yellow. Amelia nicknamed it “The Canary”, and used it to set her first women’s record by rising to an altitude of 14,000 feet.

Seven years later, in 1928, Amelia received a call inviting her to become the first woman to fly the Atlantic. This achievement made history, as three female pilots had previously died attempting the trip.

Amelia went on to gain the nickname “Powder Puff Derby”, and ranked third place at the Cleveland Women’s Air Derby. In 1931 she married George Putnam, who helped concoct a plan to become the first woman and the second person to fly solo the Atlantic.

A few years later, she set off from Paris, but had to perform an unprecedented landing in Ireland, due to strong winds and mechanical issues. For her brave efforts, President Herbert Hoover presented her with a gold medal from the National Geographic Society and Congress awarded her the Distinguished Flying Cross-the first ever given to a woman.

Amelia continued to break boundaries, setting an altitude record for autogyros of 18,415 feet that stood for years and becoming the first person to fly solo across the Pacific from Honolulu to Oakland, California.

As Amelia turned 40, she was ready for her final and monumental challenge; she wanted to be the first woman to fly around the world. On June 1, Amelia embarked on her 29,000-mile journey from Miami to New Guinea – only 2,556 miles short of completing her trip.

Although she was suffering from fuel shortages, Amelia persisted. The next day, she took off, but ran into difficulty, and was unable to contact help. Amelia was last heard from at 7:42 am on June 2. Rescue attempts were immediately put in place, becoming the most extensive air and sea search in naval history, costing US$4mn. In 1939, a lighthouse on Howland Island was constructed in her memory.