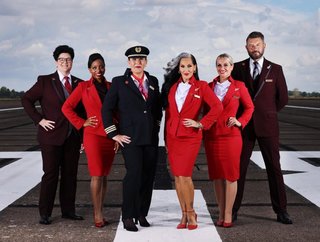 Virgin Atlantic recently announced that ground staff, pilots and cabin crew can wear whichever uniform they feel most comfortable in, “no matter their gender, gender identity or gender expression”.

By updating its gender identity policy, the airline has removed gendered uniforms and permits all employees to choose between either a red skirt suit or burgundy trousers, designed by Vivienne Westwood.

Juha Järvinen, Virgin Atlantic’s chief commercial officer, said: “It’s so important that we enable our people to embrace their individuality and be their true selves at work. It is for that reason that we want to allow our people to wear the uniform that best suits them and how they identify and ensure our customers are addressed by their preferred pronouns.”

Creating a more inclusive environment for all

In addition to the policy, Virgin Atlantic has introduced a number of other updates, including optional pronoun badges, ticketing system amends, mandatory inclusivity training for staff and training in destinations with tourism and hotel partners.

The airline now permits those who hold gender-neutral passports to select either ‘U’ or ‘X’ gender codes on their booking as well as the gender-neutral title, ‘Mx’. Although these passports are only available in a small number of countries, including USA, Pakistan and India, it’s part of Virgin Atlantic’s long-term plan to expand and amend communication preferences to ensure customers are addressed by their preferred pronouns across all touchpoints.

Canadian-based WestJet has also made significant steps towards cultivating a more inclusive environment, by announcing gender-neutral uniforms and allowing staff to have visible tattoos – another move that was first permitted by Virgin Atlantic.

“It’s just a small step that we are taking to be inclusive with our entire workforce,” said Leah McDonald, WestJet director of training and uniforms.

“We want to create a space where people feel really comfortable to be authentic and be themselves. That’s where people are able to show our guests their best side and their best service. We want them to show up as them so that they can help our guests have a great time on WestJet.”

The uniforms, designed by Project Runway Australia, also feature redesigned name tags with space for the employees to denote which pronouns they prefer customers or co-workers use when addressing them.

Although British Airways has stated that any potential uniform changes may not be as radical as those made by Virgin Atlantic, changes are being considered. A spokesman for British Airways said: “At British Airways we're committed to an inclusive working environment and as part of that, we're reviewing our uniform policy and will update our colleagues when the review is complete.”

Speculation of a new uniform change follows the fact that British Airways dropped ‘ladies and gentlemen’ from any on-board announcement, in a bid to increase diversity and inclusion efforts.

By allowing employees to express their true selves at work, the airline also found that they provide a better customer experience (24%) and have an increased sense of loyalty to their employer (21%).

Furthermore, the study found suppressing true identities to be an issue amongst Brits, with 25% stating that feel pressure to hide their true selves at work, 13% feeling uncomfortable making requests that enable them to express who they really are and 38% stating they change parts of their personality in an attempt to fit in.