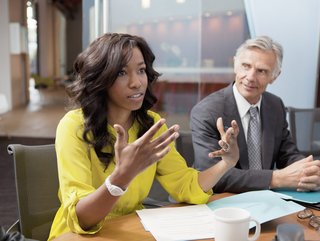 A survey of over 2,000 employees has found that gender-biased language and the use of stereotypes are widespread within UK workplaces, according to research from Samsung.

Data revealed that almost half (46%) of UK employees use gender-biased terms like 'guys' at work, which makes a quarter feel dismissed (25%), and creates a barrier to reaching full potential (28%).

In addition, women are three times (42%) more likely than men (16%) to be asked to make a tea or coffee in the workplace and women (50%) are twice as likely to be asked about their wellbeing or children than men (21%).

Similarly, the data revealed that women (37%) were more likely to be asked to do menial or admin-based tasks than men (19%) and were three times more likely to be made the target of a sexist joke (43%, compared to 15%) showcasing the profoundly ingrained gender bias which permeates UK workplace culture.

Tanya Weller, Marketing Director, Home Appliances at Samsung Electronics said: “The findings have revealed some shocking revelations about the stereotypes used towards women at work and how our choice of words is creating barriers to inclusivity in the workplace.

“Like all things, language adapts with time, and we know that as a society, we must evolve with it, by implementing a roadmap that drives greater equality and inclusion. These findings tell us the crucial role language plays in normalising gender stereotypes at work: subtle phrases like “Hi Guys”, is something many of us say without thinking, but maybe without realising it, we’re alienating people.”

However, evidence shows that employers are beginning to challenge gender-biased language, with 64% stating they had done so, 28% highlighting they had raised it with the person directly and 14% reporting it to their boss.

Confidence was shown to be a barrier for 19% of respondents who admitted they want to call out language but didn’t. Likewise, 92% said they were making a conscious effort to use inclusive language, such as “team” and “all” rather than phrases such as “guys”.

As partner of Samsung, Jackye Clayton, Vice President of Talent Acquisition and Diversity Equity Inclusion & Belonging at Textio, says: “Employers throughout the UK must take proactive steps to foster inclusive language – to attract talent and build a workplace which promotes workplace inclusivity. With almost half of UK employees using gender bias language at work, companies must do more to understand how and where unconscious bias is showing up and take action to remove it. It’s only by doing this that companies can become truly inclusive to everyone.”